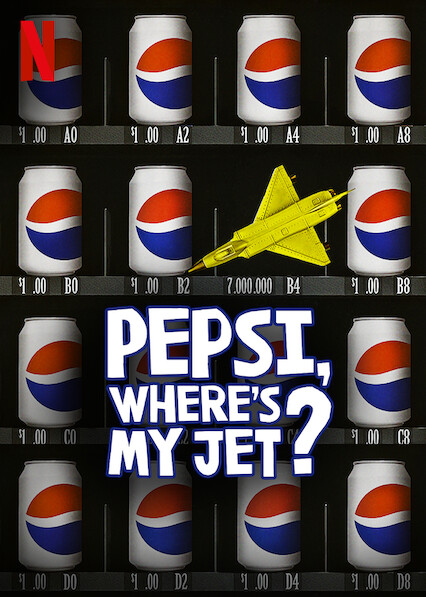 The 1990’s was a radical time. Seinfeld was on TV; Titanic was the highest-grossing film, and the internet was still a baby. A big contention in the 90’s was the Cola wars between Coca-Cola and Pepsi Co. Much like Team Edward and Team Jacob during the popularity of the Twilight saga, there were passionate camps for the soda companies. Both companies used advertising to win the popularity of the people. Coca-Cola sought to advertise a certain “family-friendly” image and even a “new” formula to sway the public. However, Pepsi leaned deep into star studded sponsorship. The iconic Cindy Crawford commercial that made young boys lifelong Pepsi fans is one of the most memorable Pepsi campaigns. There was another Pepsi campaign that was memorable for other reasons.

Pepsi, Where’s My Jet? (2022), a 4-part docuseries on Netflix details college student John Leonard. In response to Pepsi’s “Drink Pepsi, Get Stuff” campaign, John sought to win a Harrier Jet. The Jet was priced at 7 million Pepsi points and John found a way to buy enough points to get the jet.The Pepsi and BBDO advertising campaign immediately came under fire and began a legal battle with John. The documentary is very tongue-in-cheek with its editing that includes reenactments, simulations, and cheeky text that echoes Pepsi’s later amendment on their Harrier Jet campaign that said, “just kidding”. For PR students, this is an interesting look at public relations and advertising. The Cola Wars was a big PR Campaign but as the legal battle with John went on, we can see PR as a way to control a certain narrative or to cover up company oversights.

After going public about his feud with Pepsi, John’s reputation started to be under attack. The Pepsi CEO at the time went on news outlets to paint John as an opportunistic kid trying to get money from the company. In the beginning, the public was on John’s side until Pepsi decided to fight back. Later John, with the help of Michael Avenatti, started an ad campaign to help sway public opinion back to John’s side. One ad featured John with a black eye in the shape of the Pepsi logo. Another ad featured a blank page with small writing that pointed out that’s how advertisement features fine print for ads.

The documentary goes on to show the many levels of marketing and how advertisement shapes public spending. This series is a good example of the challenges of PR and advertising. Every company dream of an impactful campaign but there are dangers (laws even) regarding what an advertisement can or cannot show. Leonard v. Pepsi Co became a landmark case in the reach of contract law that is studied in law schools today. This docuseries is like a nice cross section on how PR Firms for advertisements, law, or big companies work to tell a certain story to the public.